The kids and I caught a 4:30 showing of The Wolf of Wall Street today at Leows 34th Street. A couple of HE people had said “see it with a paying audience and you’ll realize that this really is the new Scarface — people are mostly getting off on the insane manic humor, and very, very few are drawing any moralistic or metaphorical message whatsoever.” It was Jett’s second viewing, Dylan’s first. But right away there was trouble from a big black guy sitting a couple of seats to Dylan’s right. This dude wasn’t just talking all through the film — he was broadcasting his line-by-line, scene-by-scene commentary to the entire front section of the theatre.

When Dylan asked him why he was talking so much and where are his manners, the guy was indignant…”I’m enjoying myself!” The guy’s wife or girlfriend was trying to get him to chill also, but he was off on his own cloud. There was no reaching him, no guilt-tripping, no winning through persuasion or threat — he was (and probably still is at this very moment) a stone sociopath, a complete animal…gone.

We all know that African-American culture has always accepted talking during films, especially in New York. As manners have decreased and society has devolved in recent years incidents like today’s have probably increased. It has always seemed to me that theatre talkers have a certain under-educated je ne sais quoi with a vaguely alcoholic air. They never seem to be executive job material, I know that. I also know that the vast majority of New York theatre talkers I’ve run into in the past seem to be Swedish, Danish, Norweigan or Finnish. Have others noticed this?

For what it’s worth I’m sorry for the Amy Schumer sturm und drang of the last couple of days. She’s a first-class talent and deserves more respect than what I gave her. I know I’m not thinking wrong but I’m probably saying it wrong from time to time. ”It’s hard to grow up…it doesn’t stop when you’re 40…a hard row to hoe.” These words were shared a few nights ago by Ethan Hawke during a Charlie Rose interview, and they got to me. So I’m sorry, truly, for not dealing my cards with a little more compassion and gentility. I wasn’t incorrect in saying that social attractiveness standards have changed over the past decade or so, largely due to the creations of one Judd Apatow and those who’ve climbed aboard his ferry boat. But I could have put it a bit more delicately and diplomatically. Then again that’s not what the HE brand is about, is it?

It’s in my Hollywood Elsewhere nature or karma to get beaten up once or twice each year by the moshpit beasts of the Twitterverse. Long is the road and hard that out of darkness leads up to light — that John Milton quote has my name on it. Sobriety (my third anniversary is a month away) has bestowed a sense of peace and even serenity at times, and it has toned down or modified the ever-present anger in the belly. Which I’m not at all sorry about as anger has been the eternal fuel of my writing career, born of an alcoholic father, a bordering-on-evil public school system and the awful repression of a whitebread, middle-class suburban upbringing that I wouldn’t wish upon my worst enemy. Add to this a growing notion that I’ve learned a thing or two plus my natural inclination to shoot my mouth off first and think about it later, and wham…every now and then I poke a hornet’s nest or step on a landmine and the raptors parachute down upon Maple Street.

A couple of years ago I stole from Esquire by writing my own “What I’ve Learned” essay. There’s a new issue with a long piece called “84 Things A Man Should Do Before He Dies,” so here’s another ripoff: “Theatrical Movie Experiences You Should Have Before You Entirely Succumb to VOD.” Here are four indelible movie-watching recollections — three from the late ’70s, one from ’95. The concept or suggestion is that a devoted Movie Catholic should try to experience something similar in his/her lifetime.

(1) Catch An Exciting New Film In A First-Rate, Big-City Theatre On Opening Day, and In So Doing Experience Something You’ve Never Felt Or Sensed Before. The first time this happened in my 20s (teenage or tweener experiences are too impressionable) was on the afternoon of 11.6.77 at the Zeigfeld theatre — opening day for Steven Spielberg‘s Close Encounters of the Third Kind. I’d waited in the ticket line for an hour or so in the brisk November air. I was actually knocked out several times by that film (this was more than 20 years before my Spielberg hate would begin to manifest), but the first chest-pounder happened during the opening credits. White titles on black, dead silence. And then more credits and then just a faint hint of alien-like syntho-hum on the soundtrack. As the credits ended the choral hum slowly got louder and louder, and then CRASH! An orchestral crescendo perfectly synched with the the first images of the storm-blown Sonoran desert. We can’t go home again but somehow or some way, each and every movie lover has to experience something like this. A theatrical high, couldn’t stop talking about it, saw CETK producer Michael Phillips standing in the back of the theatre and talked a him a bit.

38 Comments
What It’s Come To

I don’t know how long it’s been de rigeur for U.S. theatres to run about 20 minutes worth of trailers and ads before a film. I seem to recall that the norm was more like 10 to 12 minutes a decade ago. I know that two and half years ago I linked to Marshall Fine‘s complaint about having been subjected to 20 minutes’ worth of ads and trailers at a New York-area AMC theatre. I reported in the same piece that I sat through 27 minutes worth of trailers and consumer ads before seeing Very Bad Trip 2 at the Pathe Wepler in Paris.

The latest assessment is contained in a just-posted Hollywood Reporter story about exhibitors caling for shorter trailers. Reporter Pamela McClintock states that “it’s not uncommon for many circuits to play seven or eight trailers before a film [which] translates to 17.5 minutes to 20 minutes, on top of in-house advertising.”

Trailers are aimed at the lowest common denominator, which is why they’re generally artless, numbing and often depressing. (Intriguing trailers pop up but very infrequently.) Run-of-the-mill trailers mainly convince you not to see a film rather than vice versa. By the time you’re sat through 20 minutes of trailer torture you’re much less open and receptive to whatever the feature may hold. And you’re paying for this. You’re paying $12 to $15 a head to be turned off and numbed out.

I was beaten up pretty badly on Twitter yesterday, but mainly because a lot of people out there assume that anyone using the term “ape” is throwing a racial slur. I never even glanced at that allusion. I’m so far away from that pathetic mindset that it doesn’t exist in my head, although I recognize it’s a sore point with others. So I guess I’m apologizing but on some level it almost feels chickenshit to do so. The allusion in question is so Jim Crow, so foul, so Duck Dynasty — why even acknowledge it? Why live in the primordial past by admitting that the association means something or matters to anyone with a brain? 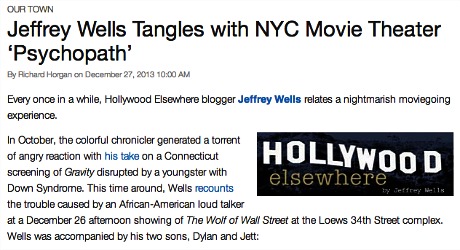 I know all about getting beaten up by politically correct 20somethings. I was called a vile racist and worse by a mostly younger Twitter mob after writing a piece on 12.26.13 about dealing with an obviously unstable, intellectually-challenged black guy who wouldn’t shut up during a 4:30 pm showing of The Wolf of Wall Street at Leows 34th Street. The same fascist thug mentality (or something very similar to it) was behind a recent online petition to disinvite Bill Maher from giving a December commencement address at U.C. Berkeley. “Bill Maher is a blatant bigot and racist who has no respect for the values UC Berkeley students and administration stand for,” wrote Khwaja Ahmed, a member of the Middle Eastern, Muslim and South Asian Coalition, in a Change.org petition titled “Stop Bill Maher from speaking at UC Berkeley’s December graduation.” Berkeley chancellor Nicholas Dirks has blocked any chance of Maher’s invite being rescinded.