There’s been no chatter about my response to Julie Miller’s Vanity Fair conversation with Amy Schumer (posted on 5.4), which included a reference to myself and last February’s Schumergate episode. I’m naturally anticipating more Twitter hate so even though this is a dead-horse issue for regular readers, I’m posting one final clarifying retort. As I noted a few weeks ago, there’s almost no point in responding to these things. The legend or the meme about what I allegedly wrote but did not in fact write has totally taken over. Nobody wants to read or re-examine anything.

At one point during Miller’s chat with Schumer about the “male gaze” factor, Schumer says, “Like the only person who has ever written anything saying that I am not pretty or attractive enough to be on camera was that one guy, Jeff Wells. I did not read [the post], but of course my best friends are like, ‘It was so fucked up!’”

Well, I didn’t say Schumer wasn’t “pretty or attractive enough to be on camera,” which of course mirrors the premise of her 12 Angry Men parody on her Comedy Central show. I wrote that in the context of the first Trainwreck trailer, in which her character was depicted as being the absolute belle of the ball who’s being hit on constantly with this and that guy almost fighting for her attention, she didn’t seem quite as hot as all that. I still think this. Schumer is attractive enough and a spirited barrel of laughs and so on, but in my mind she’s in the realm of 7.5 or 8. Is that really such a terrible thing to think or say?

With Trainwreck (Universal, 7.17), director Judd Apatow is once again introducing a chubby-cheeked, whipsmart, not conventionally attractive, neurotically bothered female comic to a mass audience — first Melissa McCarthy in Bridesmaids (’11), then Lena Dunham in HBO’s Girls (’12) and now Amy Schumer, the star and writer of Trainwreck as well as the star of Comedy Central’s Inside Amy Schumer. She’s obviously sharp and clever and funny as far as the woe-is-me, self-deprecating thing goes, but there’s no way she’d be an object of heated romantic interest in the real world. And yet that’s the apparent premise of Apatow’s film. Schumer’s wide facial features reminded me of a blonde Lou Costello around the time of Buck Privates, or Jennifer Aniston‘s somewhat heavier, not-as-lucky sister who watches a lot of TV. Don’t look at me — I’m not the one who made her the star of a film about a plucky, free-spirited girl that a lot of guys want to bang. You know who would be better in a film like this? An actress who’s nicely attractive, has the funnies and the soulful stuff besides? Jenny Slate.

“It’s become a Trainwreck talking point. Or selling point, really. For those that live by t.p.’s, the notion or term ‘give it a rest’ is a non-starter. Congenial talk show host giving ‘anything to keep the ball in the air’ guest a chance to beat up the blogger. Schumer said she ‘didn’t read it’ but that her people said ‘he called you a monster!’ At a certain point it doesn’t matter what you actually wrote. The legend becomes the legend. No winning. You just have to move on.” — from comment thread posted this morning when David Slovakia and Pertwillably pointed out the Conan/Schumer clip, which starts at 21:35. Sidenote: I cringe when someone refers to me as a “blogger” — a noun that I’ll never stop wincing at. “Columnist” will suffice. I used to say “online columnist” when print still had a foot-hold.

A work-in-progress version of Judd Apatow‘s Trainwreck (Universal, 7.17) will screen at South by Southwest late Sunday afternoon. And if a tweet posted this morning by The Hollywood Reporter‘s Seth Abramovitch is any indication, spiritually deep people with wonderfully wise and enlightened perceptions are going to lob hate grenades in my direction all over again. The “leave poor Amy Schumer alone and die, you rancid asshole” thing has been going on for 30 days now — an eternity in today’s ADD realm. I tried saying I’m sorry for the piece that posted on 2.11 but the haters wouldn’t have it. I said Schumer is obviously a first-class talent who deserves more respect than what I gave her, and the haters said “oh, yeah? Well, you’re demonic and fuck you!” I wrote that I could have played this one with a little more delicacy and diplomacy, and I might as well have poured kerosene on the fire. 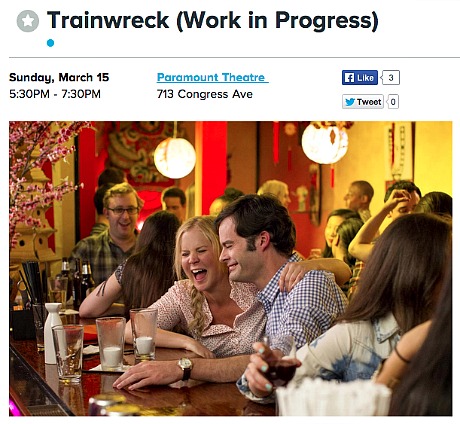 Standards of hotness change over time. I’ve said more than a few times (most recently in an HE piece posted on 8.15.14) that sexual attractiveness standards have definitely evolved in favor of the notties over the last…oh, 10 or 12 years. We’re now living in an age, partly if not largely perpetrated by the films and scenarios of producer-director Judd Apatow, in which Schlumpies and Dumpies have been sold to the public as the kind of people you want to go out with, go home with, get married to, etc.

When I was in my 20s and carousing around Schlumpies and Dumpies got no action whatsoever. They stayed home, watched TV, wept in their beds, jerked off, etc. But today they make out. If a bearded guy in an Apatow movie has bigger breasts than Cameron Diaz and a dumpy milky-white body with eight or nine pimples on his fat white ass…cool! If a lead actress looks like one of the Andrews Sisters but with somewhat wider or heavier facial features…crazy mama!

I grew up in a world in which conventionally attractive or semi-attractive people used to be the ones who got laid the most often. Trust me — I used to do quite well at the Westport Players Tavern in the mid to late ’70s, and I had a good sense of what worked and what didn’t. And if a girl who looked like Trainwreck‘s Amy Schumer was to stroll into that scene, she would have had a nice time but she would not be ardently pursued by the flannel-shirt-wearing wolves, of which I was definitely one. By the standards of that time she just isn’t top-of-the-line…sorry.

But that was then and this is now, and today I was beaten and spat upon and kicked to the ground and damn near lynched for having stated what seems obvious to me, which is that Schumer is brilliant, talented and somewhat funny but she’s not grade-A or even B-plus material, certainly by my standards as well as those of any moderately attractive, fair-minded youngish heterosexual dude who’s feeling hormonal or what-have-you.