I’ve been Drunk Stoned Brilliant Dead-ing for eight and a half months now, or since I fell for this snappy, punchy-assed doc at last January’s Sundance Film Festival. I’ve raved and raved (“Quite the cultural landmark…about something that nearly everyone understands or identifies with to some degree, which is the seed and birth of anarchic, counter-conventional, ultra-outlandish comedy, which everybody takes for granted today but was a whole new thing when it popped out of the National Lampoon in 1970″). I’ve expressed surprise that it took six long months to cut a deal for theatrical release. I sought out and interviewed columnist, author and former National Lampoon editor P.J. O’Rourke. I’ve noted the film’s popularity at film festivals over the first seven months of this year, etc. I’ve riffed on it every which way.

So when I was offered a chance to speak with director Doug Tirola a few days ago, I responded “but of course!” I was an hour late. (Sorry.) We met in a conference room at the Andaz in West Hollywood (i.e., the former “Riot House.”) . We batted the ball around but I was feeling a little sloppy in the brain. The vibe was easy and relaxed but something wasn’t quite clicking. Amiable ping-pong for the most part.

Then I struck a vein. I noted that with the film in circulation now would be an excellent time to make available all those years of National Lampoon issues (’70 to ’80) online. Tirola nodded, grinned. And then he half-shrugged. “So why isn’t it?,” I asked. “What’s the hold-up?” He answered that the National Lampoon operation is now headed by CEO Jerry Daigle and president Alan Donnes and that they had mainly managed to calm things down and put out fires. Whatever that means. I know that despite knowing for at least a couple of years that Tirola’s doc would almost certainly be hitting theatres sometime in’15, these guys haven’t been able to get it together enough to offer online sales of back issues.

Aside from a relatively short list of stand-out narrative features, for the most part Sundance ’15 has been a festival of great docs, particularly Alex Gibney‘s Going Clear, Morgan Neville and Robert Gordon‘s Best of Enemies and — my personal favorite — Doug Tirola‘s Drunk Stoned Brilliant Dead — The Story of the National Lampoon. A generally hilarious history of a great magazine and a period of inspired anarchic subversion, it’s essentially about the birth and shaping of the irreverent mindset that has defined American comedy for the last 40 years, or since the debut of NBC’s Saturday Night Live (’75), National Lampoon’s Animal House (’78) and National Lampoon’s Vacation (’83). But the magazine and its half-demented staffers were the finest and most outrageous expression of this, and Drunk, Stoned is an absolutely vital history lesson for under-35s who’ve never read any National Lampoon issues or sunk into the mythology. I don’t know what the distribution picture is, but I could see this film again right now. It captures the whole saga in one swift, punchy, well-finessed package. 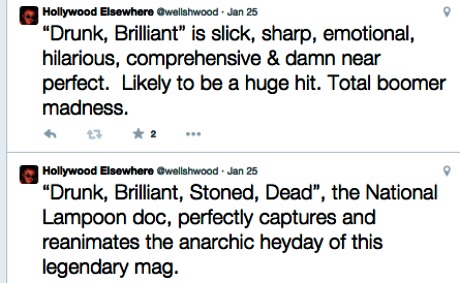 In the booklet inside the new Masters of Cinema Red River Bluray there’s an excerpt from a 1970 Film Comment interview with Red River screenwriter Borden Chase. Changes that were made to Chase’s screenplay by director Howard Hawks are discussed with interviewer Jim Kitses. One of these was Hawks’ decision to cut down John Ireland‘s Cherry Valance role, allegedly due to resentment on Hawks’ part about Ireland having scored with a woman Hawks had been having relations with. Hawks dismissed Chase’s account (which came allegedly came straight from John Wayne) in a subsequent interview. He asked if Chase was sloshed when he said it, and said he “was so full of shit.” I don’t believe Chase was fantasizing, but that’s me. 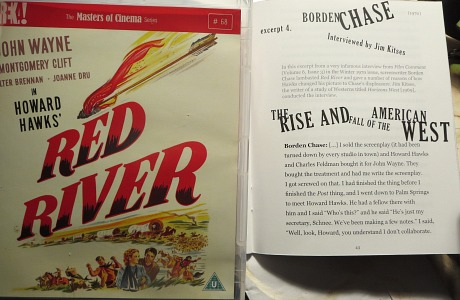 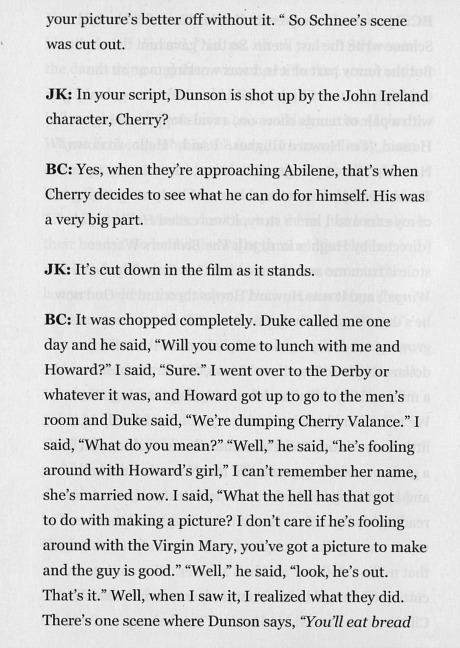 8 Comments
Brilliant Burnout Back From The Dead 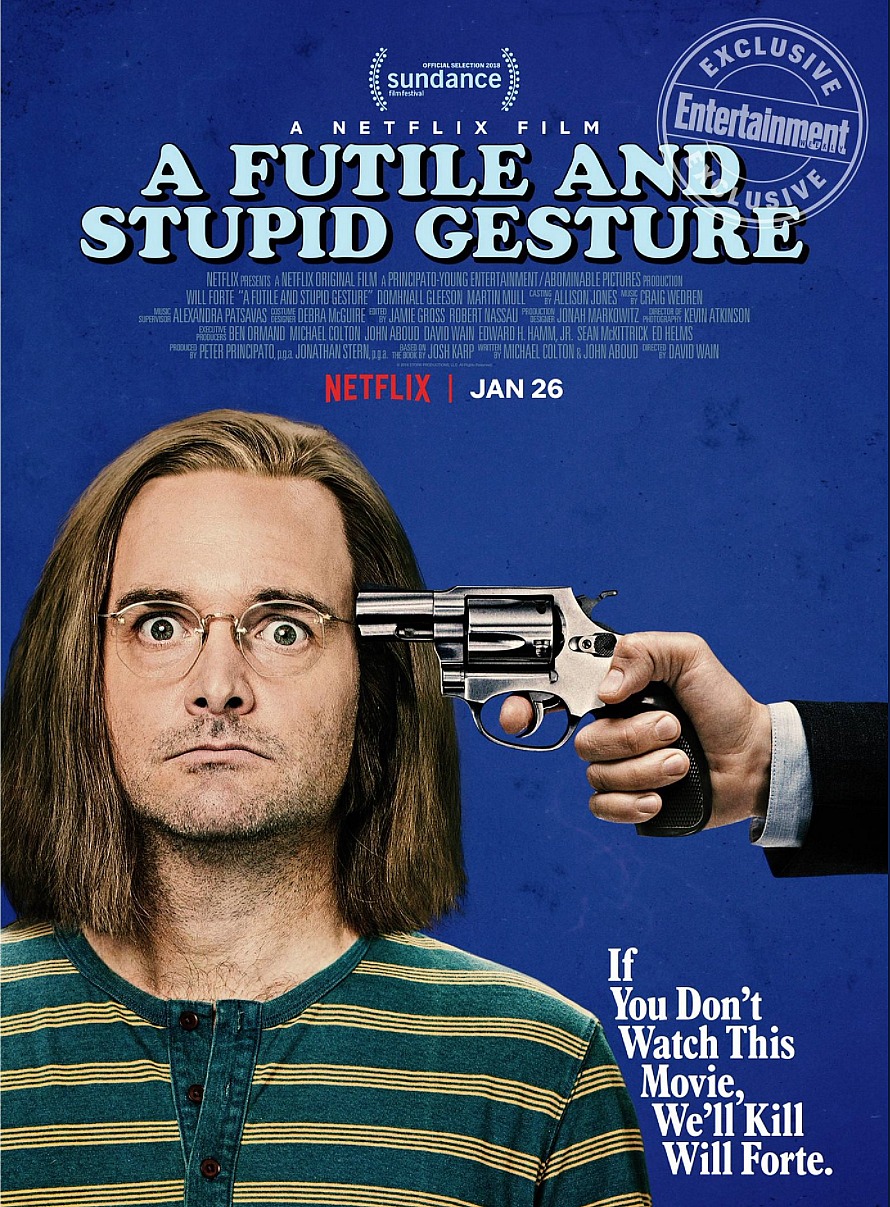 You can sense right away, however, that this Netflix production won’t be all that great. The trailer suggests a rote, paint-by-numbers scheme. If you were Doug Kenney in heaven and you had absolute mystical power in choosing who would direct this film, would you be cool with the director and co-writer of Wet Hot American Summer (’01) and Wanderlust (’12)? I didn’t think so.

Quote from 12.20 EW story by Jeff Labrecque: “The spine of Futile and Stupid is the relationship between Kenney and his more responsible and aristocratic Harvard classmate Henry Beard (Domhnall Gleeson), during and after they partnered to take their campus Lampoon publication national. So think The Social Network but with cocaine, pranks and food fights.”

Why have Netflix and director David Wain suddenly announced plans to make a movie based on a decade-old biography of National Lampoon co-founder/editor Doug Kenney (i.e., Josh Karp‘s “A Futile and Stupid Gesture: How Doug Kenney and National Lampoon Changed Comedy Forever“)? Doug Tirola‘s Drunk Stoned Brilliant Dead, one of 2015’s most under-appreciated docs, is why. Wain saw it, loved it and a light went on. Obviously. Trust me — a deal to adapt Karp’s book didn’t just happen to come together ten years later. Will Forte will play Kenney (fine) and Domnhall Gleason will play Lampoon editor Henry Beard (not a shred of physical resemblance — they couldn’t at least find somebody who hails from a vaguely similar gene pool?). John Gemberling has reportedly been cast as John Belushi; ditto Joel McHale as Chevy Chase.

Doug Tirola‘s Drunk Stoned Brilliant Dead will stream eventually, but the Magnolia Bluray comes out of the gate on 4.19. I plugged and plugged this doc for months after catching it at the 2015 Sundance Film Festival. “Quite the cultural landmark…about something that nearly everyone understands or identifies with to some degree, which is the seed and birth of anarchic, counter-conventional, ultra-outlandish comedy, which everybody takes for granted today but was a whole new thing when it popped out of the National Lampoon in 1970.” 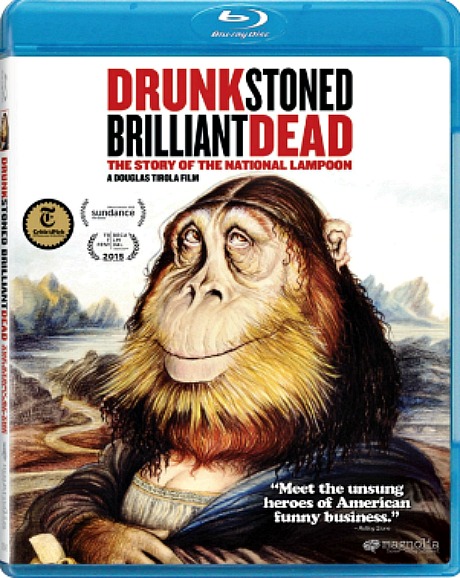 Congrats to the makers of the 15 documentaries that have made the Academy’s shortlist — Amy, Best of Enemies, Cartel Land, Going Clear: Scientology and the Prison of Belief, He Named Me Malala, Heart of a Dog, The Hunting Ground, Listen to Me Marlon, The Look of Silence, Meru, 3 1/2 Minutes, 10 Bullets, We Come as Friends, What Happened, Miss Simone?, Where to Invade Next and Winter on Fire: Ukraine’s Fight for Freedom. Due respect but it was seriously shortsighted for the Academy’s doc committee to dismiss Colin Hanks‘ All Things Must Pass, Ondi Timoner‘s Brand: A Second Coming, Doug Tirola‘s Drunk Stoned Brilliant Dead, Kent Jones‘ Hitchcock Truffaut and Amy Berg‘s Janis: Little Girl Blue. The winner of the Best Feature Doc Oscar will be announced during the 2.28.16 Oscarcast.

Last Friday 124 feature-length documentaries were submitted for Oscar consideration. A short list of 15 will be revealed in early December (less than five weeks hence), and the final quintet will be announced when all the Oscar nominees are announced in mid January. And of course I’ve been slacking on this front so here’s a roster of my personal short-list preferences. There are more than a few I haven’t seen (including Jill Bauer and Ronna Gradus‘ Hot Girls Wanted, Geeta and Ravi Patel‘s Meet The Patels, Marc Silver‘s 3 and 1/2 Minutes, Jimmy Chin and Elizabeth Chai Vasarhelyi‘s Meru, Matthew Heineman‘s Cartel Land, Benjamin Statler‘s Soaked in Bleach) but here are 11 docs that — for me, in this order — burned through in some extra, commanding, head-turning way:

There are three months left in 2015, and if you boil the fat and pretense out of all the noteworthy films released or seen over the last nine months, the ones that really stand out big-time are Spotlight, Mad Max: Fury Road, Love & Mercy, Carol, Son of Saul, Truth, Going Clear: Scientology and the Prison of Belief, Drunk Stoned Brilliant Dead: The Story of the National Lampoon, It Follows, About Elly and Brooklyn. Yeah, that’s right — Love & Mercy in third place. And it’s time turn the engine over and start with an award-season campaign. I’m looking to do phoners with a few name-brand actors and filmmakers who are fans and don’t mind saying so. Five or so, I’m thinking. I’ll call it “The Love & Mercy Conversations: Artists Speak Up For The Little Movie That Could and Did”…something like that. 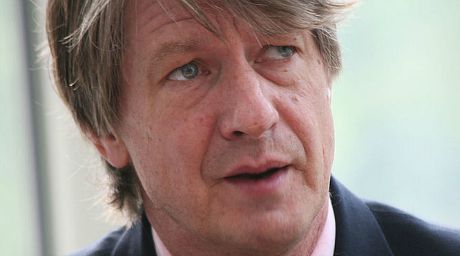 O’Rourke is the author of 16 satirically smart-ass books (including last year’s “The Baby Boom: How It Got That Way (And It Wasn’t My Fault) (And I’ll Never Do It Again),” which I haven’t yet read) and is currently a monthly columnist for the Daily Beast.

Two of my favorite O’Rourke books are “Holidays in Hell” and “Modern Manners“. I’ve also always loved the title of “Republican Party Reptile“, or more precisely the illustration of Dwight D. Eisenhower wearing a mohawk (which was dumped when O’Rourke’s publisher explained that relatively few targeted readers knew or cared who Eisenhower was). Honestly? I’ve never read “Republican Party Reptile”. No offense but why would I? I’m a leftie, and in some respects I’m selfish enough as it is.

I’m presuming that sooner or later it will sink in amongst ubers and early adopters that Doug Tirola‘s Drunk Stoned Brilliant Dead — The Story of the National Lampoon (Magnolia, 9.25) is one of the punchiest, funniest docs of the year and an absolute must-see if you have any interest in the traditions of anarchic comedy over the last half-century. I realize there are probably tens of millions who don’t give a damn about where SNL-styled comedy came from or who couldn’t care less about sampling the sensibilities of the original architects. GenXers and boomers will eventually wake up to it, I’m guessing, but if you’re a tiny bit younger Drunk Stoned is an important thing to absorb and take stock of. 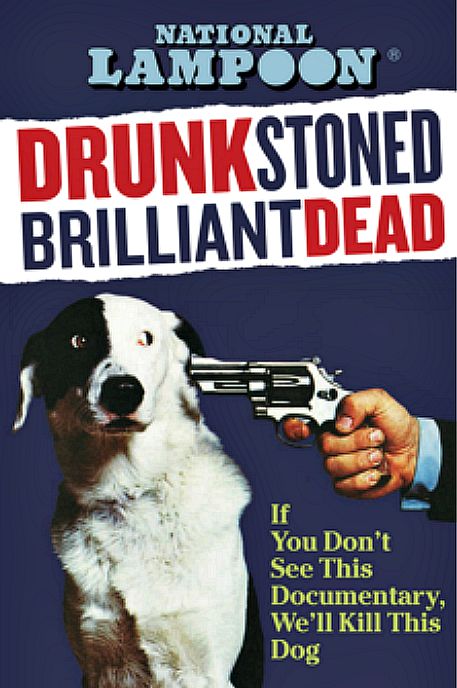 All I know is that attending the world premiere of this film at last January’s Sundance Film Festival was like being on a viewing grandstand at Cape Canaveral in the early ’60s when one of those Atlas boosters lifted off and sent a Gemini team into space. The vibrational hum, the crackling excitement. And now Tirola’s film has been screening at elite festivals for the last seven months. I wish I’d been able to attend the 2015 Tribeca Film Festival last April. But now that the opening is just a few weeks off, it feels like the sand is leaking out on the floor. For guys like me, I mean.