If your movie opens a film festival, it’s probably soft or inconsequential on some level – be honest. And it’s probably an even worse omen if your movie closes a film festival. You could actually double that equation if it’s closing South by Southwest, whose attendees are known for bending over backwards to celebrate geek-friendly genre movies as long as they’re seriously geeky where the rubber meets the road. I’m not saying Daniel Espinosa‘s Life is a problem, but you can tell where it’s coming from and feel the oppressive pangs of familiarity.

A boilerplate riff from Deadline‘s Pete Hammond about the Oscar worthiness of Alfonso Cuaron‘s Gravity was posted this afternoon. It includes a new video piece about the merits of the screenplay by Cuaron and his son Jonas (below). It’s a nicely composed look at the year’s mostly visually astounding and innovative film, and I want to once again emphasize my absolute respect and admiration for the brilliant technical craft that went into this $80 million survival flick. But the Hammond piece led me back to my original Telluride review (“Spectacular, Eye-Popping Gravity Could Be Deeper“), and I really do think my reactions were solid and straight and fairly dead-on.

Alfonso Cuaron‘s Gravity “is the most visually sophisticated, super-immersive weightless thrill-ride flick I’ve ever seen. If Stanley Kubrick had been there last night he would freely admit that 2001: A Space Odyssey is no longer the ultimate, adult-angled, real-tech depiction of what it looks and feels like to orbit the earth. Nifty and super-cool from a pure-eyeball perspective, Gravity is certainly the most essential theatrical experience since Avatar. You can’t watch a top-dollar 3D super-flick of this type on anything other than a monster-sized IMAX screen.

A healthy percentage of HE regulars surely caught Alfonso Cuaron‘s Gravity last night, so what’s the verdict? My basic Telluride response was that Gravity is technically dazzling and audacious as hell and absolutely unmissable for that, but (a) it lacks the meditative depth and resonance of J.C. Chandor‘s All Is Lost, which is roughly the same film (a solo traveller struggles to survive when catastrophe strikes) on a smaller scale and (b) that Robert Redford‘s stoic performance is much more satisfying than Sandra Bullock‘s, which struck me as too on-the-nose emotional. Here again is my Telluride review:

Gravity “is the most visually sophisticated, super-immersive weightless thrill-ride flick I’ve ever seen. If Stanley Kubrick were around he would freely admit that 2001: A Space Odyssey is no longer the ultimate, adult-angled, real-tech depiction of what it looks and feels like to orbit the earth. Nifty and super-cool from a pure-eyeball perspective, Gravity is certainly the most essential theatrical experience since Avatar. You can’t watch a top-dollar 3D super-flick of this type on anything other than a monster-sized IMAX screen.

Alfonso Cuaron‘s Gravity (Warner Bros., 10.4), which screened twice last night at the Telluride Film Festival, is the most visually sophisticated, super-immersive weightless thrill-ride flick I’ve ever seen. If Stanley Kubrick had been there last night he would freely admit that 2001: A Space Odyssey is no longer the ultimate, adult-angled, real-tech depiction of what it looks and feels like to orbit the earth. Nifty and super-cool from a pure-eyeball perspective, Gravity is certainly the most essential theatrical experience since Avatar. You can’t watch a top-dollar 3D super-flick of this type on anything other than a monster-sized IMAX screen.

Don’t go any further exposition-wise than what this trailer contains. Okay, maybe one more trailer after this but that’s all. This is a relatively short “techno-thriller” about survival, remember. In a certain sense it’s a cousin of J.C. Chandor‘s All Is Lost. I would think Warner Bros. marketers would want to hold back as much as they can. I’m presuming I’ll be catching it in L.A. before it premieres at the Venice Film Festival on 8.28.

io9‘s Meredith Woerner reports the following from Cinemacon about some teaser footage from Alfonso Cuaron‘s Gravity: “It was quick and dirty, but completely terrifying. The only bit of information we’ve ever had on this flick is this one-line synopsis: ‘Astronauts attempt to return to earth after debris crashes into their space shuttle, leaving them drifting alone in space.’ What was shown was this moment, and only this moment.

“George Clooney and Sandra Bullock hovering outside of some sort of spacecraft in modern-day space suits. Clooney’s voice crackles over a radio, ‘It’s gorgeous, isn’t it? The sunrise?’ The earth is simply twinkling in gorgeous light. They nod toward each other, a moment of silence while orbiting their home planet. And then they’re hit. You can’t tell what but they’re showered with some sort of space debris. Could be a meteor shower. The space station is shattered. One floating astronaut helplessly drags his or her fingers across the side of the station. The other grapples with some sort of tubing. ‘Don’t let go!’ Bullock cries. But it’s too late. She’s floating away, ever so slowly. You can hear her breathing pick up as she floats farther and farther away from the damaged craft. We’re not 100% sure if Clooney manages to stay near the wreck, but Bullock is 100% gone.

“All in all,” Woerner concludes, “the footage felt like [it lasted] one minute — but it was intense enough to leave a massive impression. Let’s hope Cuaron keeps the real “terror in space” vibe alive through the end.” One presumes that the footage was in 3D, although Weorner doesn’t mention this/

Whoever attended last night’s semi-secretive Django Unchained screening in Culver City, all three hours’ worth, isn’t saying anything about it on Twitter. Or at least not on my screens. I’m all ears.

There was also a preview screening last night of Alfonso Cuaron‘s Gravity at a commercial plex in Sherman Oaks. (Probably the Arclight, I’m guessing.) An excellent source confides that “VFX were 95% completed, 3D and color grading still work in progress.” The 3D-converted, presumedly groundbreaking stuck-in-space drama, which costars George Clooney and Sandra Bullock, was bumped last May into a 2013 release date.

Let me get this straight: Alfonso Cuaron‘s allegedly groundbreaking Gravity, an IMAX-filmed 3D space drama that wrapped principal photography roughly eight months ago, won’t open later this year but sometime in 2013 because of competition for IMAX screens from Skyfall and The Hobbit and one or two others?

That sounds to me like 2001: A Space Odyssey being bumped out its April 1968 release slot because of competition for screens from Chitty-Chitty Bang-Bang or…you know, something of that calibre.

The vision of Alfonso Cuaron doesn’t make way for safe audience-pleasing franchise films from Sam Mendes or Peter Jackson…c’mon. Especially with George Clooney and Sandra Bullock toplining. Methinks there’s possibly a bit more to this than the availability of IMAX screens.

The great Guillermo del Toro told me a little something about Alfonso Cuaron‘s currently-shooting Gravity at last night’s Don’t Be Afraid of The Dark after-party. He said that Cuaron and dp Emmanuel Lubezki (a.k.a. “Chivo”) are again intending to push the cinematic envelope, although in a different way than they did with Children of Men. The 3D space-rescue drama costars George Clooney and Sandra Bullock. 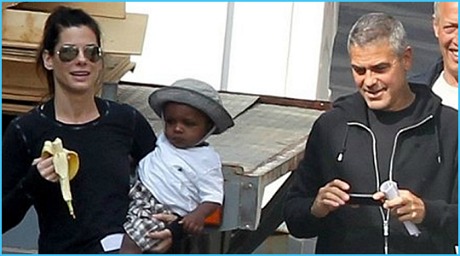 I’ve gotten hold of a second draft of Cuaron’s script (written in ’09). If anyone has a more recent draft, please forward. The co-authors of a 2010 draft are reportedly Alfonso and Jonas Cuaron and Rodrigo Garcia Barcha.

The Wikipedia logline: “In Earth’s orbit, satellite debris hits a space station, destroying most of it and killing all but two astronauts. The remaining astronauts fight for survival and to return home.” One of the astronauts will be played by Bullock, apparently. I don’t know who Clooney plays, but let’s assume he’s the other astronaut in peril and nor some mission-control Ed Harris-type guy.

Gravity will be released in 2012 by Warner Bros.