My initial reaction to The Other Woman was colored by low expectations based on the downmarket trailer. I’m presuming that the HE community steered clear of this Nick Cassevetes-Julie Yorn-Melissa Stack film, but did anyone find it at least a little better than expected? Like the Boston Herald‘s James Verniere and the San Francisco Chronicle‘s Mick LaSalle did? A $24,700,000 gross expected by tonight. “Insiders at the studio tell me that it played well to an audience over 25, but [this] also shows signs of potential growth with 18-34 audiences, and with males,” Deadline‘s Mike Fleming wrote today. “There really hasn’t been a female-driven edgy comedy since last summer’s The Heat and maybe We’re The Millers, and clearly there is an audience here that will show up.”

Yesterday afternoon I expressed a combination of concern and confusion about Nick Cassevetes having directed The Other Woman (20th Century Fox, 4.25), which has been sold as a broad downmarket farce about three pissed-off ladies (Cameron Diaz, Leslie Mann, Kate Upton) making a sociopathic philanderer (Nikolaj Coster-Waldau) pay for his sins. It just seemed a little beneath the director of Alpha Dog, She’s So Lovely and The Notebook. What could this possibly do for his career? On top of which the views of a majority of Rotten Tomatoes Australian critics seemed to underline that the film had problems. But then I saw it last night at the Westwood premiere and realized that (a) I’d been flim-flammed by Fox marketing and (b) some of the Aussies had it wrong. 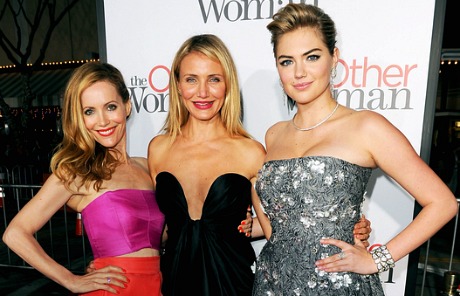 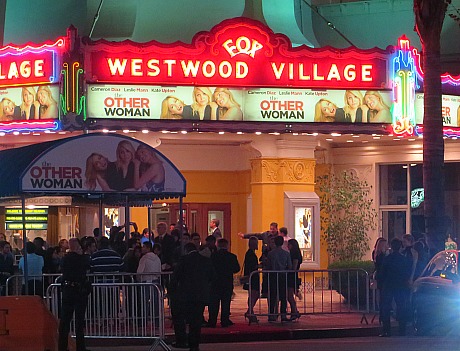 Taken last night following The Other Woman premiere at the Village.

I’m not doing cartwheels here but I am saying, no lie, that about 70% or 80% of The Other Woman isn’t half bad. I was expecting rank stupidity, but I mostly didn’t get that. It’s not a great film or on the level of Mike Nichols‘ Working Girl or anything, but it’s a lot better that the marketing has indicated. It’s a tiny bit spazzy and silly and predictable in spots — some of it doesn’t work as well as it could or should. But a lot of it is smart and loose and improv-y and on the low-key side. Dumb comedies sometimes piss me off, but not this one. Mann and Diaz and costar Taylor Kinney get into the spirit and carry it aloft and just about bring it home. Woman is almost never conventionally broad, certainly not in the painfully slapstick sense that I was dreading. Melissa Stack‘s screenplay is fast and clever. For me it was no-laugh-funny but a lot of people around me were chuckling and guffawing all the way through.

The West Coast premiere of The Other Woman (20th Century Fox, 4.25) happens tonight in Westwood, and Hollywood Elsewhere will totally be there with bells, camera and notepad. An obviously broad sisterhood comedy (the term “sismance” doesn’t work at all) about taking revenge upon insensitive males, it’s been directed by Nick Cassevetes, produced by Julie Yorn and written by Melissa Stack. The Australian critics posting on Rotten Tomatoes are mostly negative (45%) — it might as well be faced. What I’d like to know is how does Cassevetes go from directing She’s So Lovely (’97), John Q (’02), The Notebook (’04) and the semi-respectable Alpha Dog (’06) to …uhm, this?

The Other Woman (20th Century Fox, 4.25.14) is a comedy about three women (Leslie Mann, Cameron Diaz, Kate Upton) taking revenge upon a hot-shot businessman three-timer (Nikolaj Coster-Waldau) who’s been involved with and cheating on them all. So it’s a kind of female payback comedy a la Nine to Five (i.e., aimed at women) but it’s also trying to appeal to horndogs with Upton’s white-bikini carnality. The movie was produced by Julie Yorn, wife of A-list entertainment attorney Kevin Yorn and also his partner in their production company, LBI Entertainment. On 2.18.14, Heavy.com‘s Paul Farrell reported an “anonymous source” allegation, tweeted by Whisper.com’s Neetzan Zimmerman, that Yorn (brother of Hollywood agent Rick Yorn and singer/songwriter Pete Yorn) was having an affair with Gwynneth Paltrow. Maybe bullshit, maybe not. (On top of which Paltrow and her husband Chris Martin are in some kind of open arrangement.) If the Yorn-Paltrow thing is true, this would at least add a level of intrigue to an otherwise rote-seeming formula comedy.