HE’s biggest movie-star moment during last Monday’s Once Upon A Time in Hollywood party at Musso & Frank party? Meeting costar Julia Butters. She has that magnetic spark, that vibe, that extra-ness, that charismatic mesmerizing whatever. Plus she seems to have a certain Zen calm thing at the same time. She’s not excitable like some kids get. She has this casual Brando ‘tude. The ten-year-old Butters (born on 4.15.09) was sitting at a small table with her parents, Darin and Lorelei Butters. Tatyana and I strolled up, introduced ourselves, shook hands, etc. 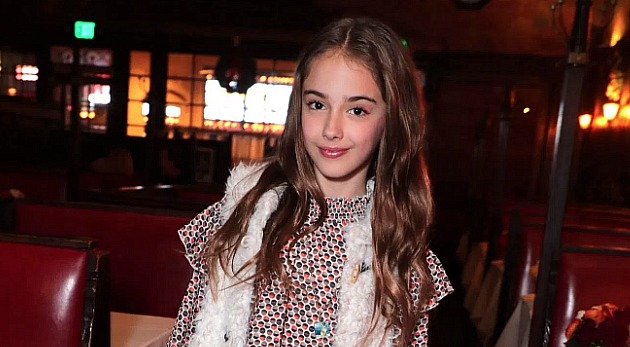 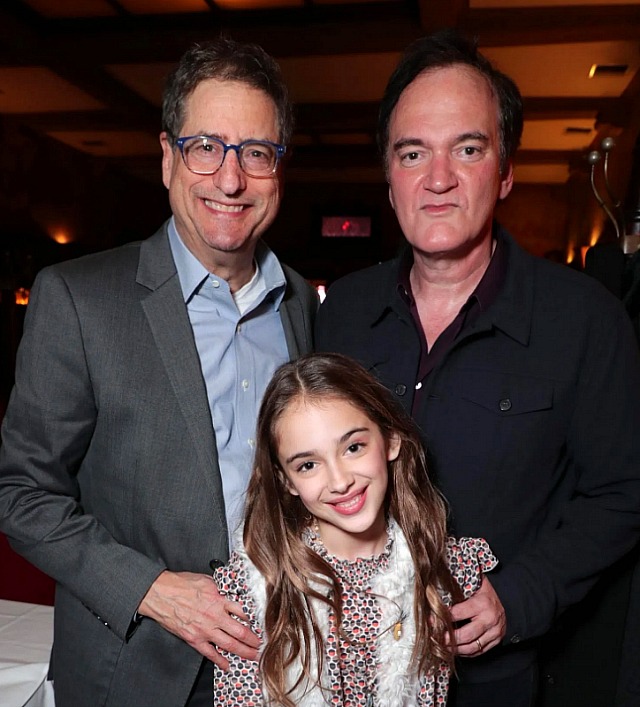 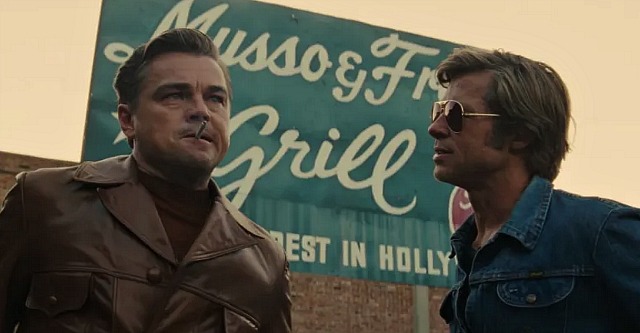 “Don’t cry in front of the Mexicans.” 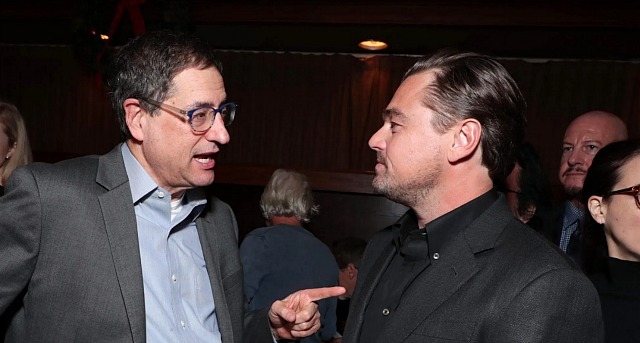 I didn’t understand the recent back-and-forth between Leonardo DiCaprio and rightwing Brazilian president Jair Bolsonaro. The latter made false claims that Leo’s Earth Alliance donated $5 million to local environmental groups, which Bolsy claimed were responsible for starting Amazon forest fires. Leo’s response confused me. Why didn’t he just cut to the chase and call Bolsy as asshole? I was going to ask Leo about this but I got distracted by cheesecake and then he left.
December 4, 2019 6:05 pmby Jeffrey Wells
No Comments
Stewart’s Big Night

The feedback is so bad that Kristen Stewart and IndieWire interviewer Anne Thompson have to avoid speaking directly into their microphones.

Stewart consequently sounds so faint and echo-y that I can’t really hear her…okay, I can hear the occasional phrase or expression. She doesn’t always speak in short, hurried, half-muttered phrases, but she often does.

Will Thompson ask about my all-time favorite Stewart performance — i.e., her ghost whisperer in Olivier Assayas’s Personal Shopper? That, for me, was her absolute peak achievement. I own and cherish the Criterion Bluray.

Thompson: “Your Personal Shopper character was in such an ethereal, spiritual place…it must have been hard to get into that.”

Was Stewart upset about original Twilight director Catherine Hardwicke being more or less thrown off the Twilight franchise? I can’t really hear her response.

I truly admired Stewart several weeks ago when she said she “doesn’t give a shit” about winning the Best Actress Oscar (or words to that effect). Very few contenders on her level have let go with that kind of candor. Hats off.

Thompson asks about Stewart’s starring role in David Cronenberg’s Crimes of the Future. Asked when we might see it, Stewart goes “oh!” but then pulls back and says she’s not sure. Translation: It will debut at Cannes ‘22.

Stewart’s Bizarre Award-Season Arc
Awards Daily's Sasha Stone is actually predicting (or half-predicting by way of an intuitive feeling) that Spencer's Kristen Stewart might be...well, a slightly more likely winner of the Best Actress Oscar race than some of us are supposing. Or so she suspects. Nobody knows anything, of course.

Gay Oscars — “Dog,” “Flee,” Stewart, DeBose
Is it fair or accurate to call the 2022 Oscars the gayest so far? Or is it just another gay year in a no-big-deal way?

SAG Snub Led To Stewart Sympathy
Everyone thought Kristen Stewart's shot at a Best Actress nomination was toast. Spencer is roundly despised so how did she pull it off? Variety's Owen Gleiberman called it, I suspect, when he posted a 1.15.22 column titled "Why SAG’s Best Actress Snub May Have Done Kristen Stewart a Favor."

Now that Kristen Stewart‘s Best Actress campaign is all but toast after being excluded from the 2022 SAG Award nominations, and since no one explored the whys and wherefores in this morning’s initial reaction thread (“That’s It For KStew“), I’m asking again: why was her Lady Diana snubbed?

HE theory #1: It wasn’t the quality of Stewart’s performance, but the psychotic dreamscape “Diary of a Mad Princess” vibe of Pablo Larrain‘s Spencer. I never argued that Stewart didn’t give her all — she obviously dove into Larrrain’s vision hook, line and sinker. But the movie was agony to sit through.

HE theory #2: Ever since SAG merged with AFTRA ten years ago, the annual nominations have adopted a downmarket character and, especially since ’16 or thereabouts, focused on representation as much as quality of performance. Stewart might have been edged out, I suspect, by votes for Respect‘s Jennifer Hudson — never a truly serious candidate due to the film’s mediocre reputation, but popular with the SAG-AFTRA rank and file.

HE theory #3: On 11.18.21, Variety‘s Clayton Davis posted a Stewart interview in which she said “I don’t give a shit” about winning an Oscar for Spencer. This might have been a factor.

21 Gold Derby forecasters have stated preferences in the race for Best Actress Oscar. The overwhelming favorite is Kristen Stewart‘s performance as Diana, Princess of Wales in Spencer, and so she’s sitting atop 13 lists.

Except the most deserving recipient for the ’21 and ’22 Best Actress Oscar is Penelope Cruz in Pedro’s Parallel Mothers — theres no question about this, none whatsoever.

How many GD smarties have Cruz at the top of their lists? Two — Variety‘s Tim Gray and Queerty’s Michael Musto. There should be more. Cruz’s performance is incontestably fuller, richer, tethered to common experience than Stewart’s. Comparing the two isn’t allowed — entirely different leagues.

Stewart’s submission to Spencer‘s concept — Diana was half-mad, besieged by visions and nightmares, lost in her own head — is total and therefore admirable; you could even call what she does mesmerizing. (being a stickler, I can’t apply that term.) But she’s mainly being favored because critics and public alike are still Diana-struck (they all want to curtsy and bow) and because Spencer declares that the royal family members were bloodless ghouls, and this synchs with current wokester views.

Plus there’s Stewart’s LGBTQ profile and her two-decade career besides (plugging away since 2002’s Panic Room, only 31 years old).

Nagging problem: A few brave critics who’ve seen Pablo Larrain’s film have honestly shared what they feel about it. The fact is that Spencer is an oppressive and smothering thing to sit through. It literally gives you a kind of headache. This doesn’t seem to bother Stewart’s supporters, but in the old days (i.e., before 2015) if a movie really stunk then the Oscar chances of this or that performer in said film would be negatively affected. Not so much any more, or so it would seem.

Stewart is a respected actor. She’s been in a few half-decent films (Welcome to the Rileys, Clouds of Sils Maria, The Runaways, Cafe Society) and also made a lot of stinkers. Spencer is one of them. How many truly awesome, artistically approved knockout films has Stewart made in her life? Exactly one — Olivier Assayas‘ Personal Shopper.

13 for Kristen Stewart. 3 for Lady Gaga. 2 for Olivia Colman, 2 for Penelope Cruz, 1 for Jessica Chastain.

Since early summer the word on Amazon’s Seberg (formerly Against All Enemies) has been that Kristen Stewart‘s performance as the tragic Jean Seberg is quite the standout and actually better than the film itself. Stewart’s performance is “extremely understated and internal,” I was told last May. “She never goes too big and plays her cards with acute subtlety.” The film was directed by Benedict Andrews from a screenplay by Joe Shrapnel and Anna Waterhouse. 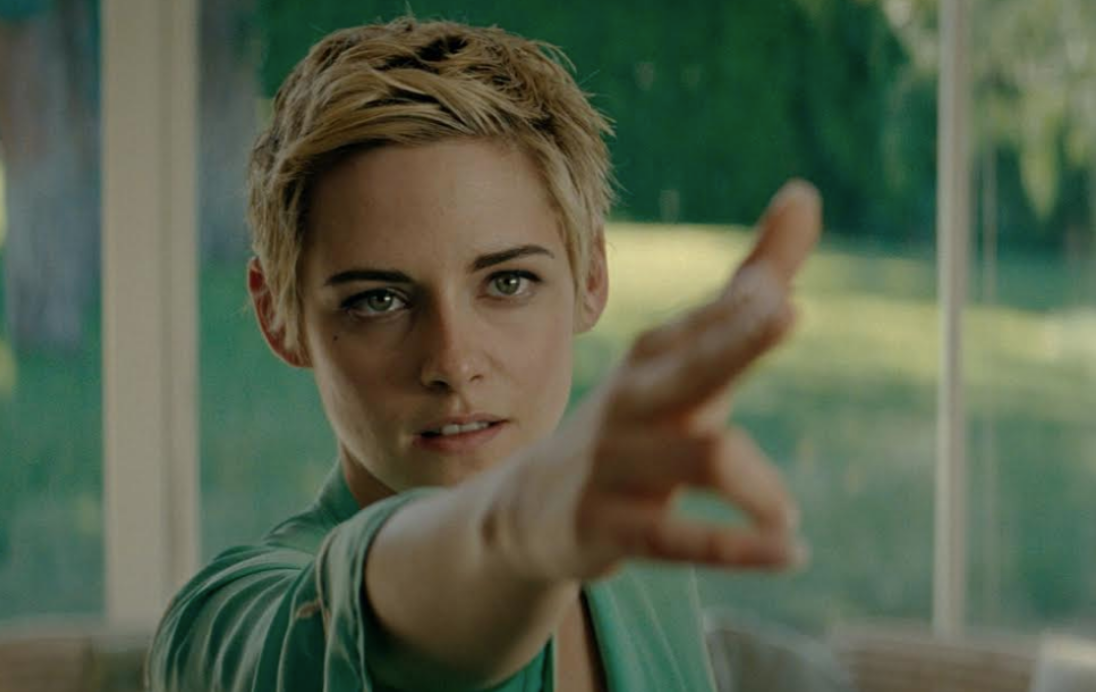 What’s up with critics relentlessly handing out Best Supporting Actress awards to Kristen Stewart for her performance in Clouds of Sils Maria? NYFCC, Boston Online Film Critics and today’s Boston Film Critics awards…she was very good in that 2014 Olivier Assayas film (shot in ’13, premiered in Cannes 19 months ago) but calm down. (Update: Stewart was also the LAFCA runner-up for their BSActress award.) How about giving an occasional Best Supporting Actress award to a performance from a 2015 film now and then? What about the entirely deserving Elizabeth Banks performance in Love & Mercy or that show-stopping Jane Fonda performance in Youth? Seriously, this Stewart vogue has to stop. Otherwise hey-hey for Love & Mercy‘s Paul Dano sharing the Beantown Best Actor award with The Revenant‘s Leonardo DiCaprio. And hooray for Spotlight winning Best Picture and Best Screenplay. Here’s the Variety report.

TheWrap‘s Dan Callahan is claiming that Kristen Stewart‘s portrayal as an angry, frustrated student in Tim Blake Nelson‘s Anesthesia, which screened last night at the Tribeca Film festival, is easily the strongest element. Stewart “has a nearly film-stopping monologue in a counselor’s office where she unloads all of her character’s rage and resentment about life. Nelson [lets] Stewart go as deep and as hard as she can into Sophie’s darkest feelings. She’s so despairing about what she sees around her that she has taken to burning herself with a curling iron in order to feel some control over her life, and Stewart makes this self-punishment seem gruelingly convincing and necessary.” Callahan adds that Stewart “is so tough and harsh here that she [actually] throws Anesthesia a bit off balance.”

Congrats to Kristen Stewart for becoming the first American actress to win a Cesar award. A couple of hours ago Stewart was handed a Best Supporting Actress Cesar for her deft and planted performance in Olivier Assayas‘ Cloud of Sils Maria, which costarred Juliet Binoche and Chloe Grace Moretz. Clouds had its big debut in Cannes last May. “With the exception of Kristen Stewart‘s alert, quietly arresting turn as a personal assistant to Binoche‘s middle-aged actress undergoing an emotional-psychological downshift, Clouds is a talky, rather flat experience,” I wrote on 5.23.14. “It isn’t Persona or Three Women or All About Eve, although it seems to be occasionally flirt with the material that these three films explored. It just didn’t light my torch, and would have been a more interesting film if Assayas has focused more on Stewart and Moretz than Binoche.” 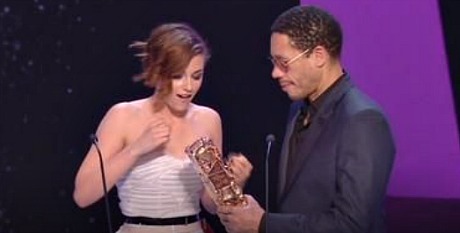 “With the exception of Kristen Stewart‘s alert, quietly arresting performance as a personal assistant to Juliette Binoche‘s famous, middle-aged actress undergoing an emotional-psychological downshift, Olivier Assayas‘s Clouds of Sils Maria (IFC Films, 12.1) is a talky, rather flat experience. It isn’t Persona or Three Women or All About Eve, although it seems to occasionally flirt with the material that these three films explored and dug into. MCN’s David Poland has written that it sometimes feels like “a female version of My Dinner With Andre” — generous! But on that note I’ll give Poland credit for thinking about this rather airless and meandering chit-chat film more than I did. It just didn’t light my torch. I agree with Poland on one point — it would have been a more interesting film if Assayas has focused more on Stewart and costar Chloe Moretz, who’s more or less playing a version of herself.” — posted on 5.23.14 from the Cannes Film Festival.