Support on Patreon Follow @wellshwood
31 Comments
One of The Weakest Cannes Film Festivals Ever?

Over the last nine days beginning on Wednesday, 5.13 (tomorrow is my last full day here), I’ve been listening to moaning and occasional tap-dancing from literally dozens of festivalgoers about Matteo Garrone‘s Tale of Tales, Yorgos Lanthimos‘ The Lobster, Woody Allen‘s Irrational Man, Nathalie Portman‘s A Tale of Love and Darkness (which I didn’t even see after hearing I didn’t need to bother), Gus Van Sant‘s The Sea of Trees, Nanni Moretti‘s Mia Madre, Maiwenn‘s Mon Roi, Joachim Trier‘s Louder Than Bombs, Brilliante Mondoza‘s Taklub (which I saw but didn’t feel motivated to write anything about), Paolo Sorrentino‘s Youth, Hao Hsiao-Hsien‘s The Assassin (which I’m expecting to more or less suffer through tomorrow), Jacques Audiard‘s Dheepan…almost everything shown here has been received as meh-level, problematic, mildly disappointing, respectable but not earthshaking, etc.

Is this the weakest Cannes lineup anyone can remember? Kinda feels that way. Telluride’s Tom Luddy and Julie Huntsinger are having champagne for breakfast. I know titles will be added, of course, but right now, what a letdown. Lame. Weak tea. The Netflix withdrawal was devastating, decimating. If the festival could have at least shown Roma, Norway and The Other Side of the Wind, things would be looking somewhat better this morning.

I’m leaving home for three weeks, travelling thousands of miles and laying out roughly $4K to see these five significant films plus whatever the noteworthy surprises may be.

No Luca Guadagnino (Suspiria will play Venice/Toronto), no Laszlo Nemes (Sunset), no Nuri Bilge Ceylan (The Wild Pear Tree), no Brian De Palma (Domino), no Mike Leigh (Peterloo), no Paolo Sorrentino (Loro), no Jennifer Kent (The Nightingale), no Claire Denis (High Life), no Alfonso Cuaron (Roma), no Olivier Assayas (E-Book), no Carlos Reygadas (Where Life is Born), no Paul Greengrass (Norway), no Terrence Malick (Radegund), no Woody Allen (averse to showing A Rainy Day in New York as this would involve press badgering) and no Orson Welles (The Other Side of the Wind). 15 might-have-beens!

What’s the point of re-mentioning the out-of-competition screening of Solo: A Star Wars Story?

No Lars Von Trier for now, but The House That Jack Built, an envelope-pushing serial-killer drama with Matt Dillon and Uma Thurman, may be announced as an add-on.

Obstinate French exhibitors and that prehistoric French law insisting upon a three-year window between theatrical and streaming are the villains this morning.

From Variety: “The competition program includes just three female filmmakers, prompting Frémaux to reiterate his position that ‘the films that were selected were chosen for their own intrinsic qualities,” not the gender of their directors. Acknowledging the importance of the #MeToo and #TimesUp movements, (i.e., “The world will never be the same again, and we will question our own practices about the gender parity” in salaries and jury representation), Fremaux stressed that “there will never be a selection with a positive discrimination for women” — i.e., a quota system.

In the just-posted “Deadline’s Cannes Corrections” piece, I noted that Nancy Tartaglione and Andreas Wiseman had pooh-poohed the possibility of Woody Allen‘s A Rainy Day in New York being offered a slot at the 2018 Cannes Film Festival.

They dismissed this because “it would make for an awkward red carpet, given that some actors from the film” — Timothee Chalamet for one — “have donated their wages to various [#TimesUp-related] movements.”

At the end of my piece I asked Tartaglione and Andreas Wiseman “why so dimissive?” They acknowledged in their article that Cannes topper Thierry Fremaux “has historically maintained that he chooses films based on merit,” but then they turned around and derided the Rainy Day possibility over a relatively minor red-carpet attendance issue. “Where is the merit in that consideration?,” I asked. “Is this festival about artistic integrity or isn’t it?” 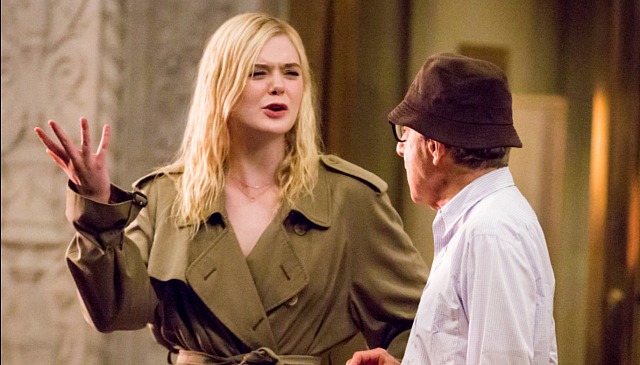 Elle Fanning, Woody Allen during filming of A Rainy Day in New York.

Soon after posting HE reader Zach Heltzel reminded that “red-carpet starfucking is definitely a factor for Fremaux.”

“Of course glamour and flashbulbs are a consideration,” I replied, “but the Woody Allen thing feels like a matter of honor and merit and integrity.

“Thierry has invited Woody to Cannes seven times (Hollywood Ending, Match Point, Vicky Cristina Barcelona, Irrational Man, You Will Meet A Tall Dark Stranger, Midnight in Paris, Cafe Society) over the last 16 years. He’s been a staunch admirer and supporter of the man. Presuming that Amazon won’t be blocking a potential screening of Rainy Day in New York by withholding the DCP, it would be reprehensible to abandon Allen in this, his darkest hour since the early ‘90s, especially with Amazon presumably inclined to either dump A Rainy Day in New York or give it some kind of bum’s-rush, straight-to-streaming release.

“If Cannes is about cinematic merit first and foremost and A Rainy Day in New York is at least as good as the weakest Allen films that have premiered in Cannes (Hollywood Ending, Irrational Man, You Will Meet A Tall Dark Stranger), it seems to me, given Fremaux’s steadfast relationship with Allen over the last decade-plus, that he’s honor-bound to offer him a festival slot for A Rainy Day in New York.

“Because at the end of the day and given the facts throwing shadow upon the 26-year-old allegations against Allen in the matter of Dylan Farrow, there is no alternative but to conclude that the bulk of the evidence indicates that Allen is not guilty of immoral or criminal behavior. At best the issue is one of serious uncertainty and ambiguity.”

30 Comments
Raise Your Glasses for Stuhlbarg

It’s been nearly 11 months since I first saw Call Me By Your Name at Sundance ’17. Like everyone else, I was floored by that quietly climactic father-son scene between Michael Stuhlbarg and Timothee Chalamet. Even before it ended I was dead certain that Stuhlbarg would become one of the five contenders for Best Supporting Actor Oscar, and perhaps even the likeliest winner.

But then, of course, The Florida Project premiered in Cannes four months later and then Willem Dafoe began to happen in the early fall, and now there’s not even an element of doubt about his winning, despite strong competition from Sam Rockwell‘s performance in Three Billboards outside Ebbing, Missouri. Stuhlbarg’s performance, jewel-perfect as it is, never lifted off the award-season runway. The unfairness of life amazes me, and it never stops. 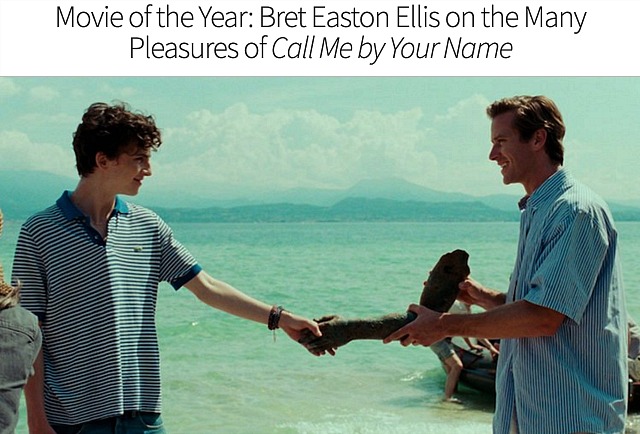 From Brett Easton Ellis’s 12.18 Out piece: “In terms of plot nothing much happens on the surface of Call Me By Your Name, but of course something monumental is happening because what we are witnessing is the erasure of innocence — this affair will kill that. On a second viewing the gay vibe** from Elio’s father (Stuhlbarg) is clearer, and in a very moving scene near the end he gives a speech to Elio (Chalamet), devastated over the loss of Oliver and flooded with the pangs of first love’s disappointments.

“The speech is culled from the book where the father tells his son that he knew what was happening between him and Oliver and that he has nothing to be ashamed of and to cherish the pain he’s feeling and that he’ll always be there for him. This scene could have been nearly insufferable in its noble ‘progressive’ virtue-signaling: if only we all had fathers this wonderful and warm-hearted and accommodating, who can console their sons with lines like ‘When you least expect it nature has cunning ways of finding our weakest spot,’ and ‘Remember, I’m here.’

“And yet Stuhlberg sells it with a hushed technical virtuosity that makes every word land and vibrate, even though at times he overdoes the saintly Jewish-Daddy thing. Stuhlberg makes this the real climax of the movie — it becomes a primal scene — and in the packed theater I saw the movie you could hear the gay men (at least half the audience) barely holding back muffled sobs.

In my 5.21 post about the just-concluded 68th Cannes Film Festival being one of the weakest in recent memory, I forgot to menton or more precisely re-mention my immense satisfaction with (a) Kent Jones‘ Hitchcock/Truffaut, which press-screened twice during the festival but which I’d seen in Paris on Monday, 5.11, and reviewed the next day; (b) Steve McQueen: The Man & Le Mans, which I was very pleasantly surprised by when I caught a Salle Bunuel showing about halfway through the festival; and (c) Pablo Larrain‘s The Club, which I respected thematically and admired from a craft perspective but didn’t much care for otherwise — too grim and gray and claustrophobic. The big awards ceremony happens tomorrow night — Sunday, 5.24. Like I’ve been saying all along, it’s gotta be Son of Saul and Carol in this or that respect (probably Cate Blanchett‘s performance, or better yet hers and Rooney Mara‘s together) and I don’t know who or what else.